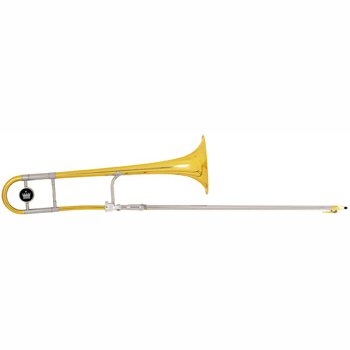 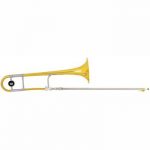 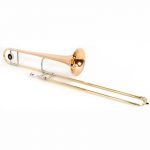 The King 2103 3B Trombone is built with a classic jazz trombone style in mind.  It is generally regarded as the most versatile commercial trombone in the world, suitable for both lead and solo playing. The King 3B features a .508” bore for excellent control in all ranges of the instrument and the yellow brass bell offers a quick response. These king small bore straight trombones have set the standard in jazz performance for generations.

Henderson White, founder of the HN White Company, started his business as a proprietor of a small repair shop in Cleveland, Ohio. With the help of Mr. Thomas King, a local trombone player, White developed his first trombone in 1894. This was viewed in the market as a “revelation” to the music world due to its radically different bell, bore, and mouthpipe designs. Players loved the “King” trombone because the slide was smoother and lighter than any other.

These instruments gained immediate success with professionals including Al Pinard, the trombone soloist with Arthur Pryor’s Band. In 1909, the HN White Company developed a “Department of Acoustical Research” with the goal of developing higher quality instruments. As production grew, King became known for brass and woodwind instruments. From 1917-1918, the HN White Company was the sole provider of saxophones for the US military during World War I. In the 1920’s, King would even become the first US manufacturer of French horns.

When Henderson died in 1940, control was taken over by Edna White, the first women executive officer in the male dominated music industry. Under her leadership the company flourished. As most company’s production of brass products halted during World War II, Edna was able to secure two major government contracts making radar units and proximity fuses that kept the factories running.

Coming out of the war, King instruments saw great popularity in the 40’s and 50’s with names like Tommy Dorsey, Harry James, Ziggy Elman, Julian “Cannonball” Adderley, and Charlie “The Bird” Parker. In 1951, the King 3B trombone was introduced and today is still the world’s top selling jazz trombone.

In 1964, production of King Instruments was moved to Eastlake, Ohio outside of Cleveland where they are still made to this day.

Be the first to review “King 2103 3B Trombone” Cancel reply